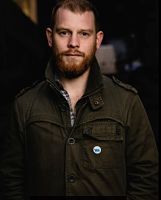 Seán Gray is a flute, whistle and guitar player from the village of Coylton in Ayrshire. He attended The National Centre of Excellence in Traditional Music in Plockton where he studied wooden flute with Dougie Pincock (Battlefield Band) and guitar with Jack Evans (The Easy Club). Since then he has toured throughout Europe and North America with the award winning Paul McKenna Band. During this time he was involved in recording four studio albums. For over 10 years Seán has been involved in teaching traditional music with organisations such as Fèisean nan Gàidheal, The Youth Music Initiative, Live Music Now, and GFW, as well as music camps throughout the world.

His newest project MODULƎ involves guitar (Seán Gray), violin (David Lombardi) and drums (Stuart Brown). Through the use of multiple loop pedals and effects MODULƎ create a unique, multilayered, cinematic sound that defies the group’s size and draws equally on the diverse influences of its members - www.modul3band.com