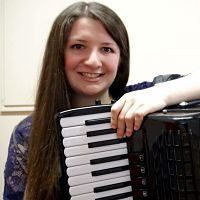 Sarah Alexander is a recent classical accordion graduate The Royal Conservatoire of Scotland, studying with Djordje Gajic. Before her studies, Sarah competed in the Scottish music scene, winning the Ladies’ Overall at The Perth Accordion Festival, and competed at The Oban Invitational Masters in The Highlands & Islands Music & Dance Competition. In Sarah’s first year at the RCS, she was the recipient of The Agnes Millar Harmony & Counterpoint Prize for Practical Musicianship, and in her second year she was commended for her performance in the Bach Competition. In 2015, she gave a solo recital at The Edinburgh Fringe in St Mary’s Metropolitan Cathedral as part of a series of lunchtime concerts with RCS students. Sarah has also given recitals at Renfield Stephen’s Church in Glasgow presented by Classical Musicians Scotland, and at St Andrew’s Cathedral in Aberdeen as part of their concert series. She has also played in several of the Keyboard Showcase Concerts at the RCS. Sarah has been Director of Music & Organist at Williamwood Parish Church since November 2015, where she directs the church choir, plays for various services, and also runs a successful concert series in the summer. In her spare time, Sarah enjoys playing the piano and passionate about promoting the accordion as a classical instrument. She is currently a freelance musician and teacher throughout Glasgow