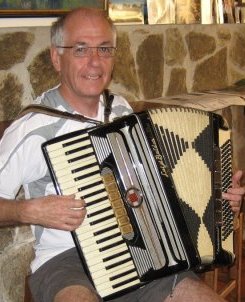 Alan is one of our Senior Tutors supporting the wide range of classes running on Monday nights. You will usually find him with Nigel Gatherer at the Monday Slow Session just before classes start.

Alan Shute has studied accordion from the age of 9 and gained Diploma level from the British Association of Accordionists and more recently achieved Grade 5 at the Royal Scottish Academy of Music and Drama in Scottish Traditional Music.

An accomplished competition player, Alan has competed at Perth and Musselburgh Accordion and Fiddle festivals over the past few years and has regularly been placed in the Musette, Polka and Veteran Scottish sections. He was also the NAO United Kingdom Musette champion from 2009 – 2011.

Alan enjoys all styles of accordion playing and takes great delight in passing on his enthusiasm for the wide variety of music which can be played on “the box”!